Okay. I clicked on a link I should have known better than to follow. It was a story listing the 5 mixed drinks a man could order and still be manly.

Needless to say, I shortly ended up incensed and quite perturbed at this amateur, juvenile, and insipid list. I do not link to the article because I do not want the site to get any more advertising revenue. Here is their short list:

Instead of just picking apart the horrible nature of the list and the problems with the article’s “logic,” I intend to put forth a different list. A list for someone who has a greater ability than to get drunk, wear bright vertically striped shirts, and yell “Woo” at the top of their lungs in a bar.

I will be trying to avoid my natural tendencies to just start listing Gin drinks, but instead try to give a list with varied liquors and my reasoning on this counter-list. In no particular order: 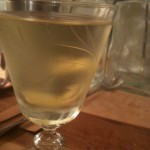 The martini is really a great chance to express individuality. There is no single “right” way to make one. Therein lies the “manliness” of the drink. What do you like? To get to the point of figuring that out, you had to try it in different and varied ways. That idea that I could talk about this with someone ordering a different martini … ah, there is the secret to the king of the cocktails. Is there not something “manly” about having an opinion and sticking to it?

Me? I like a very wet martini with a lemon twist instead of an olive. Two ounces of gin with half an ounce of dry vermouth. Shaken or stirred? Probably stirred.

Look, confidence, from what I have been told, is a “manly” quality. If, in this judgmental and undereducated times, you have the 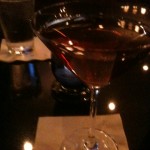 I prefer mine with Rye for the spicier, more interesting flavor profile. I find the most bourbons can be too cloyingly sweet in the drink. 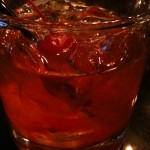 Knowledge is key. Is it “manly” to know your whisky? To appreciate it and learn about it and to cherish it? I certainly think so.(But this drink also goes on the inchoate 5 best “womanly” mixed drinks list too) That is where the Old Fashioned comes in. It is a celebration of whisky with over a hundred permutations. The basic OF starts by muddling a maraschino cherry and orange peel in some sugar and bitters. To this, the whisky is added, some ice … and there you have it. New additions include using simple syrup, a splash or water, or soda water to even out the drink, etc. This drink makes the real nature of the whisky shine through. The bit of sweet, the bit of sour, the bit of bitter, all runs together and picks out the little differences in each booze. It is certainly a manly drink if you think it is “manly” to be competent. And if Don Draper from Mad Men drinks it, who is going to argue?

A little hint of danger seems necessary for “manliness.” If you are too boring or staid, well, you won’t seem like much of a man from my observations. Why choose a rum drink here? Rum is hot. Tiki drinks are hot. And there is a lot you can do with it. A Caipirihna is made from a Brazilian sugar cane rum called cachaca. Consider it the SOuth American version of the Mojito. You take a lime, cut into wedges, and muddle it with a bit of sugar or simple syrup. Then add your 2-3 ounces of cachaca and stir. I’ve seen some versions with a bit of mint or other layers of flavor, but the basic one works just fine. It has a bit of an edge from the cachaca and is just a little bit outside of the comfort level if you keep it simple.

A real margarita, on the rocks, not the frozen slush with the pre-made mix, is, I think, a manly drink. You have to have some fun and in the summer something refreshing is good. A good tequila, triple sec or cointreau, and lime juice is the basic recipe. No salt is needed if you use a good tequila. I prefer a recipe of 60ml blanco tequila, 25ml triple sec, 25ml lemon juice, 20ml simple syrup, 25ml lime juice. I don’t like Patron for a tequila in general and especially not in a margarita. It just does not have enough agave taste to really make it taste like I think a margarita should. And yes, my favorite margarita recipe was from Jeffrey Morgenthaler. Hat tip.

So there is my list of 5 mixed drinks a man can order to be “manly.” I am pondering over a womanly list and may try to post that later.