Because my local cigar shop declined to order the Liga Privada when it first became available, they’ve missed the boat completely on this favorite offering by Drew Estate. I just never got around to ordering one and the Liga’s rave reviews got lost in my memory banks.

You can imagine my delight when the shop manager handed me the new Undercrown by Drew Estate, which is described as a cousin of the Liga Privada. He told me that the Liga Privada was such a great cigar that the torcedors in the Drew Estate factory refused to smoke anything else. Due to the demand of the Liga, Drew Estate had to limit the number of sticks their employees could actually smoke and began working on a new cigar for their workers to enjoy. Thus, the Undercrown was born.

The Undercrown features a wrapper that I’m unfamiliar with: a Mexican Otapan Negro Ultimo Corte (also referred to as a San Andres), which has a delayed harvest to increase sugar content and smoothness.

As I’m unfamiliar with this wrapper. I did a little digging at cigars.com, where this article puts it in the Maduro category:

“San Andres: Cuban-seed tobacco harvested in Mexico’s San Andres region, San Andres wrapper comes in a variety of shades but is noted for its smooth and toasty qualities accompanying a sweetness you find in almost every maduro. This wrapper pairs well with most any filler making it a prime choice for blenders. (Example: Nica Libre and Padron Anniversary).”

The binder is a cured Habano and the filler is made up of a Brazillian and Nicaraguan leaves. The cigar is rolled fairly tight with a slight amount of pinch. Its wrapper is rich, dark, oily and leathery. 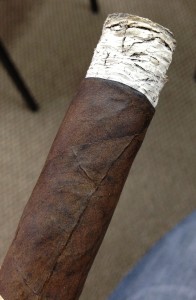 This cigar is oily, almost slick with with lots of give to the pinch. The wrapper is dark and toothy with a few large veins showing.

The cigar immediately begins putting out mass amounts of smoke from the foot upon lighting. This persists throughout this very, very smoky cigar. It begins nutty with hints of espresso without any bite whatsoever. The draw is firm.

This cigar begins to tell its story in the first third, bringing an abundance of nuttiness that flips back and forth somewhere between cashews and macadamias. This very sweet Maduro almost has a latin undertone. A certain creaminess comes and goes.

During the 2nd third the nuttiness appears toasted. Dark chocolate fades in and out in the roof of the mouth. The flavor ramps up and so does the heat. This cigar likes to be smoked slowly. Giving it a rest reviews the toasting from the nuts.

The final third persists with the nuttiness but a spiciness begins to pick up. The cigar continues to heat up and its time to put it down.

Final Thoughts: This is a fascinating maduro with enough complexity to keep you thinking about it afterwards. It truly tells a story that will likely improve with some box time.