The Perdomo Patriarch Maduro is truly a special cigar. Unveiled by Nick Perdomo Jr at the 2008 IPCPR, the cigar uses the personal blend of his late father, Nick Perdomo Sr. According to Perdomo, most of this cuban seed, Nicaraguan grown tobacco used was harvested in 2004, aging four years before the cigar’s 2008 release.

For this Patriarch, we’re smoking a 5 5/8 inch X 46 Corona Extra with a triple fermented maduro wrapper.

Appearance: This is a dark, oily maduro with some fine tooth with several tiny veins. The construction is solid, no soft spots with a minimal amount of pinch in the foot. 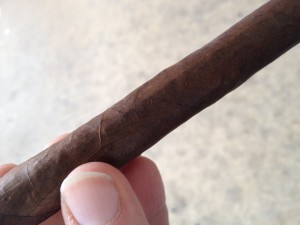 Light: There is a blast of flavor at the light. The cigar is immediately woodsy with a chocolaty maduro. The third or fourth puff brings spice with a bit of pepper on the retrohale.

First Thrid: The beginning of the first third has a creaminess that is unexplainable and truly puzzling. The creaminess fades and an equally puzzling sweetness comes through with a nutty hint. As the cigar burns closer to the middle it reveals an earthy dark chocolate. This is an odd little cigar.

Second Third: The cigar waves a little bit and corrects itself. Cocoa, hay, and nuts begin to dominate the flavor spectrum. The sweetness has fallen off a bit but is still present. This ciga 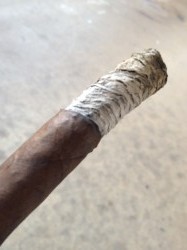 r has a wonderfully consistent draw that leaves an oil slick in your mouth, with minimal smoke coming from the dark grey foot. A bitterness builds the further along we go.

Last Third: Chocolate, earth and spice remain dominant flavors. There’s not much change towards the end.

Final Thoughts: Nick Perdomo Jr stated in an interview that his goal was to honor his father’s reputation by releasing a super premium cigar from $6-$9. I believe this to be a truly fitting tribute. This cigar is a complexity; constantly changing flavors and telling its story. While you’re probably not going smoke these every day, this is fantastic cigar to enjoy alone in ponderance.

This makes me want to smoke: The corojo version of a larger size.