Before I started blogging here, I had already been invited to the Little Rock Launch party for American Harvest on January 30th.  This is a new organic spirit hitting the market.  It was a fun time and had a good crowd of people to sample the product, try some drinks, and be introduced to it. 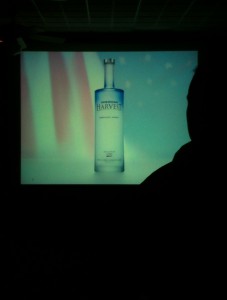 First off, anyone who knows me knows that I am not a big vodka drinker.  I am not a fan of odorless, colorless, flavorless beverages.  I just don’t see the point or the enjoyment in it.  American Harvest is a “vodka” but not really a vodka.  It is a distilled grain spirit, but it has a flavor addition to it – there is something there.  It is interesting enough that I want to drink more of it; I want to see what it will do in a lot of cocktails.

AH is American made.  It is distilled from USDA certified organic wheat and the additional flavor compound is also organic, though they wouldn’t share exactly what it is.  Hurm.  Some super tasters may have to try to figure it out and get back to us.  Unlike gin, this is a flavoring or component added post distillation.

The organic part isn’t as big of a selling point for me.  The spirit itself, however, is really quite nice.  It has a smoothness that you would expect from a good vodka but something herbal or flavorful about it.  The additional flavoring is nice; I couldn’t quite pin it down, but it was not citrusy to me. It definitely was not juniper.  In a lot of ways, this reminded me of a Plymouth gin only dialed down.  Without that juniper taste, this may be the spirit that convinces a lot of people to look for more complex cocktails. It definitely is something to taste and not chug.

I started with a Harvest on the Rocks which is nothing more than the spirit with a twist of lemon.  I was still skeptical at this point, but wanted to see what was there.  The level of complexity and flavor surprised me.  I immediately wanted more and started thinking about how it would work in a wet martini with lots of vermouth.

Before I went with the martini, I sampled another option which had grapefruit juice, simple syrup, and a dash of bitters in it.  I opted not to get a sugared rim.  The drink had a nice amount of sweetness, but not too much.  I am a big fan of bitter, so the prospect of grapefruit juice did not dissuade me at all.  It wasn’t too sweet.  It wasn’t too much like plain old juice.  The bitters and AH definitely brought out some of the more subtle flavors from the grapefruit. Before I got too deep into the drink, I put it down and regrouped with a few snacks.

The wet martini was the big winner for me.  I really enjoyed the vermouth and AH playing together.  It was not as complex as a gin martini but it was interesting enough to engage my taste buds when I took a sip.

While the organic certification is not as big a selling point for me, the fact that it is being made in the U.S.A. means they ought to be able to keep shipping costs under control.  I was told that it should retail at under $25 per bottle.  At that price point, I can do nothing but recommend that you find a bottle and give it a try.  The flavor is clean but subtle.  I think you may also be pleasantly surprised.

Disclosure – They did give me a swag bag.  It had marketing materials, some wheat, and some cool soap.